This year we find the Great Oojah reclining in his palace surrounded by his court comprised of Don, his Hum  Jum Jarum, Snooker the Kitten-Cat and Jerrywangle, Oojah’s mischief making nephew. Overcome with boredom, Don suggests they declare a Royal Season. After discovering the royal personage has outgrown most of this royal regalia, the friends organise a series of events and entertainments. Inevitably Jerrywangle is soon up to

his usual tricks, disrupting the proceedings and even turning a profit at the expense of the citizens of Oojahland.

From a distinctly anti-social garden party to his horseless horse show, Jerry teases and affronts with his customary abandon. His pièce de résistance is undoubtedly the two-headed donkey which he submits to the royal season exhibition, although Snooker is onto him almost immediately.

In a separate story, Jerrywangle, successfully sabotages his uncle’s attempts to set him on the path to a respectable career. 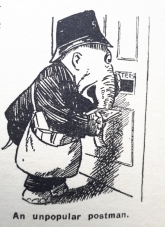 There are great vignettes as usual, my favourite being a one page cartoon entitled ‘Turning the Christmas Table’. You will also find instructions on how to manufacture some very handy minature drawers, an easy-to-make paper doll (‘if you follow the instructions carefully’) and another two colour plate from a story about elves.