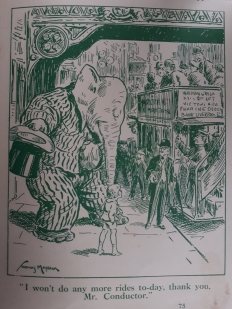 There is just one story featuring Flip-Flap, the Great Oojah,in this annual, published by E Hulton, owners of the Daily Sketch, where Oojah stories and cartoons appeared from 1919 until the early 1950s. ‘Flip-Flap in London Town’ describes the adventures of Oojah, Don and Snooker on a trip to the capital city. There are plenty of mishaps and some implausible adventures, such as an elephant riding around town on a London bus and falling in the Thames. The Great Oojah gets confused between the lions in Trafalgar square and his own Lord Lion. Snooker gets lost and Oojah is incacerated at the Tower after becoming somewhat obsessed with the crown jewels.

Thomas Maybank’s drawings are great but there are no colour plates of the Oojah entourage in this annual although ‘Fun in Frogland’ and ‘Netty’s Arrival in Woggletown’ are well illustrated by other contributors. This appears to be a one-off annual. If you find any for previous or subsequent years I would love to view them. Check out the advertisement on the back cover of the book for a 4lb tin of Mackintosh’s Toffee de Luxe! Those were the days. 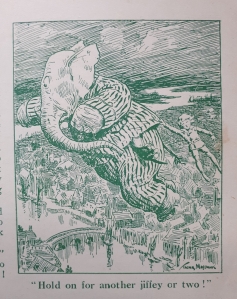 Oojah. Snooker and Don make their way to London Town 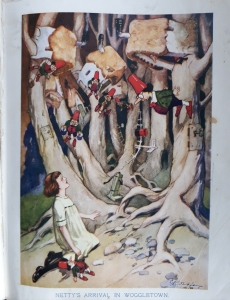 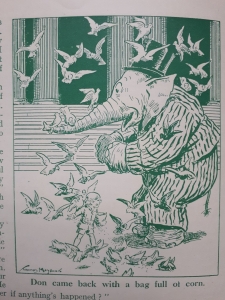