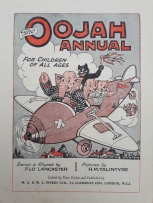 fair share of bad luck as well as good. The incendiary tendencies of the inhabitants of Oojahland permeate this annual (as indeed they do several others). PC Jerry gets a taste of his own pyrotechnics on his first beat. Uncle Oojah, Snooker and Binky all wake up to find their bed and clothes alight and Rabby Bunnit gets covered in soot. Even Woeful Walrus sets his whiskers on fire and is nearly sizzled to a cinder. Wise Uncle Oojah instructs Lord Lion to set up a Fire Brigade but it is not long before several volunteers find themselves tied up in knots. In ‘JerryWangle’s Royal Visit’, Jerry becomes a plenipotentiary and Snooker a stowaway. King Dingo’s wicked cousin, Snitchel, is blown away by a few paper bags, but not before falling down a chimney and also covering himself in soot. 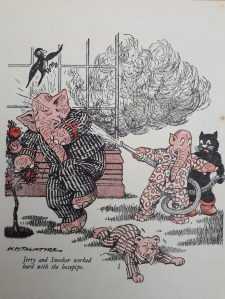 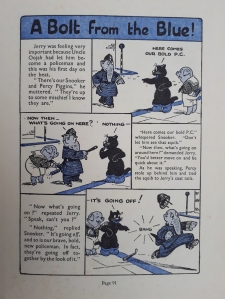