Once Upon a Time Children’s Annual 1921

Another wonderful book featuring two great Oojah stories with some stunning plates and pen and ink drawings from Thomas Maybank. In the first story, ‘Flip-Flap in Wangletown’, the Great Oojah sets out to save his brother Wangle from debtors’ prison. Don and Snooker help out despite Snooker’s misgivings about the worthiness of Brother Wangle.

There is some great dialogue, “Mercy me!” gasped the Sheriff, “Are you the Great Oojah, sir?” “Yes, I’m the only Great Oojah there ever was,” Flip-Flap answered. “Then I’ll write you a pardon at once, kind Oojah,” said the Sheriff. “There’s no paper here – but never mind, I’ll use the table-cloth”. 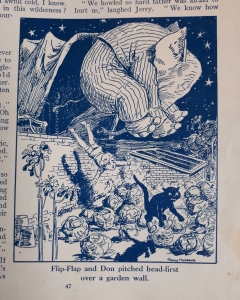 As with all the Oojah stories there is an unspoken assumption that the Great Oojah can simply do whatever he likes without reference to local laws or authorities.

In this early story, Jerrywangle still lives with his brother, Jimmiewangle, in Wangletown, and they are both up to mischief throughout. Much of this is at their father, Wangle’s expense, but they also manage to propel Oojah and Don over a fence and pelt the outgoing mayor with mud. There’s a great showcase at the end with Jerry and Jimmie taking a turn as star performers and their useless father, Wangle, somehow ending up as mayor of Wangletown.

‘The Wonderman’ is the second Oojah story in this annual. It features Professor Foozle, the hapless inventor with a penchant for explosions.

After returning his palace to Oojahland following their trip to Funbeam, a sequence of strikes, and a dramatic lock-out, the Great Oojah meets Professor Furdistan Foozle for the first time. The strike is ended and Flip-Flap, in conciliatory mood offers everyone a chocolate cigarette. But Foozle has other ideas and demonstrates his own brand of chemical warfare on the fox who started the strike. Foozle’s inventions continue to misfire throughout and Snooker and Don see the professor mainly as a kind of in-house jester rather than someone who provides any kind of useful service to their Oojah.

“There’s too much foozling about him, I can see,” Snooker grumbled. “What will he be professoring next, I wonder?”

A mysterious outbreak of coughs and colds keeps ‘Doctor’ Oojah busy for a while until he is assailed by yet another wayward invention of the Foozle Man; a chair which has a mind of its own. If only they could find the instructions.

Snooker, Lord Lion and Don all fall victim to the incompetent professor and even Oojah realises in the end that whatever the claims his new friend might make, the safety and integrity of Oojahland are best served without a Foozle on hand.

There are plenty of non-Oojah stories and features throughout this annual. I was especially drawn to Frabjous Beasts and The Battle of the Pantry. Peter’s fishing party was also clearly a success!

Don escapes Professor Foozle to play Oranges and Lemons with the Rabbits.

Frabjous Beasts Once Upon a Time Childen’s Annual 1921 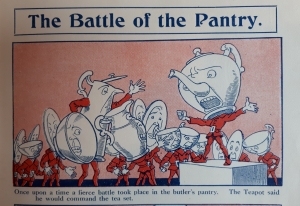 Oojah is crowned once more by his people.