Jerrywangle, Uncle Oojah’s nephew, supplants Don as a major character in this year’s main story, ‘Uncle Oojah’s Baby’. Uncle Oojah is now firmly cast as the bombastic yet lovable tyrant who bungles his way through each day. Often he is badly influenced by Jerrywangle who not only picks a fight with the Lion family on a flimsy pretext, but constantly loses the baby or puts him in danger. To make matters worse, he never acknowledges his responsibility for the mayhem that ensues. The baby in question is Binky Bear whom we shall find playing his own part in future stories. 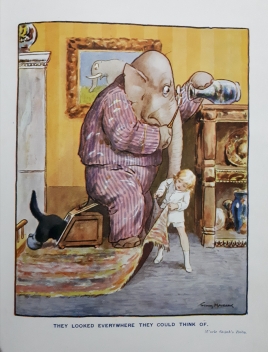 The utter implausibility of any baby surviving the parenting of Oojah, Jerrywangle and Snooker is what makes the story work so well. Also noticeable is the absence of the Great Oojah’s magic power which played a prominent part in earlier stories. No mention is made of them and they simply seem to have disappeared. Perhaps they have been lost in his forgettory. You’d have to ask Snooker, his black kittencat, who minds his forgettory for him.

As always in these 1920s Oojah annuals there is some great artwork and lots of Oojah inspired comic strips such as Uncle Oojah’s Hammock, Uncle Oojah Buys a Cow, How Jerrywangle Missed the Carnival and Snooker’s Seaside Adventure.

Other notable features include Hee Haw (The Diary of a Donkey), a Chinese themed story, The Golden Journey, and a re-working of Little Red Riding Hood. We meet Professor Bigbrayne and Clockwork Charlie again and that customary character of this era of British colonialism, the golly, appears more 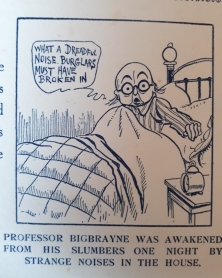 than once. Although there is no overt racism here, Uncle Oojah is probably not for the politically correct. In some ways, the Great Oojah’s presumption of authority, which is founded on nothing at all, seems to simply reflect the attitudes prevalent at the time. There is neither approval nor disapproval, just an unchallenged assumption that this is the way the world is. Colonial perspectives are most apparent and edgy in ‘The Ostrich Farm’, one of two books about Uncle Oojah’s travels which were probably written originally in the 1920s Oojah Paper supplements but which were not published in book form until 1938.